On Theon's Loyalties (and Fandom's shittiness) 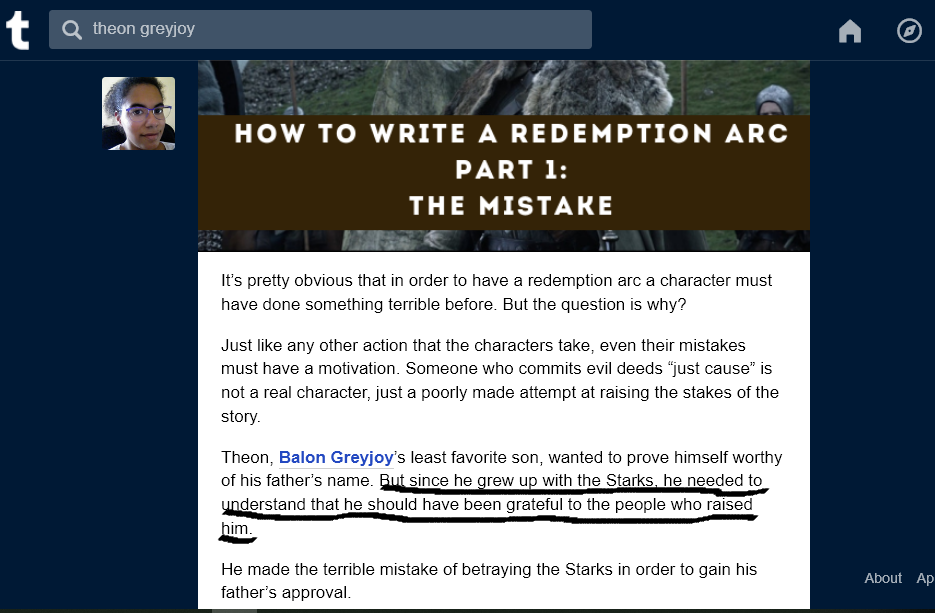 See this is the part I don’t agree with and why I get annoyed at all the talk about Theon’s story being a “redemption arch.” Now, arguably, he had other things to atone for - such as the murder of the farm boys. But no one is actually talking about that when they talk about Theon needing redemption or when they say they hate/hated him. They’re talking about their faves the Starks. And I just…I just don’t fucking agree that someone owes loyalty and gratitude to the people who first helped re-subjugate his people after their bid for independence from an imperialistic power and then took him, a child, from his home and family to be a hostage who could be executed at any moment if his father steps out of line.

(Yes, they treated him decent. Yes, Balon’s an asshole. But that doesn’t change the principle of the thing. It’s not like it wasn’t advantageous for the Starks to form a “polite fiction” around Theon. Rodrik posits that if Theon was a prisoner Ned should have kept him “chained to a dungeon wall.” But can you imagine that? The honorable Lord Stark who not only takes a 10 year old hostage but also keeps him chained up in a dungeon. Sure. And really, Robb is the only one who seems to genuinely care at all about Theon. As for Balon, Theon, who clearly has bad memories of his brothers, doesn’t seem to have such of his parents and is genuinely surprised that his father doesn’t come out to greet him when he lands on the iron islands as Robb’s emissary. His mother loves him, so does his sister.  Does he maybe owe some personal loyalty to Robb? Because he encouraged and facilitated Robb’s affection? Maybe. But also, how honorable, exactly, would it have been for Theon - Theon who identifies as a Greyjoy first and foremost, who is a Greyjoy, in a culture where family name and clan membership are extremely important - to have continued to support Robb and turn against his family?

Were there ways for him to still defect to his family but minimize the “betrayal” of Robb? Well, yes, he could have stayed away from Winterfell. But, tbh, having chosen his family and with his father’s plans what they were, Theon would have almost certainly had to fight directly against Robb or Robb’s interests eventually. And tbh, I don’t think people would hate him any less even if he hadn’t gone after Winterfell itself. Because he still wouldn’t have chosen their faves the Starks.

Seriously. Even with Robb…if Robb had suddenly been faced for whatever reason with a choice between his family and Theon would he have chosen Theon? Would he though? And would anyone blame him for choosing his family? Imagine the AU where Balon decides to sacrifice his youngest son. Decides that Theon is lost to him anyway, Asha/Yara will make a fine-enough heir, and he really wants to try at another rebellion. Balon does what he wasn’t supposed to do. Ned Stark, with a heavy heart, realizes that if his authority and warnings are ever going to mean anything again, he will need to stay true to his word and execute Theon. Robb - let’s give him the benefit of the doubt here - dismayed and distraught, throws a fit. He argues and pleads with his father not to do it but Ned lectures him on why it’s necessary and, finally, Robb gives in. He stands by as Ned executes Theon and later fights alongside his father to quell the new Greyjoy rebellion. Is Robb now a traitor? Would anyone in the fandom hate him?)

I really…to me, Theon’s story isn’t really about redemption or atonement. It’s more about identity and self-acceptance and how to function in a world that’s put you in an impossible, painful position. How to make choices that turn out to make things worse for you rather than better and realize you should have handled things differently and live with the that and move on from that. Theon has done some really bad things (as stated above) and he’s far from the only character in this series with shitty-actions baggage, including well liked characters. He could have done a better job of balancing his loyalties to his family and his personal loyalty/relationship with Robb. He probably needed to grow out of his arrogance/bravado streak that he has at the start (though that’s also primarily driven by deep insecurity due to his situation). But I don’t think, in the context of this world especially, that any of that requires the kind of major redemption arch (that ends in ultimate self-sacrifice) that people seem to think is needed.
Tags: character: theon greyjoy, fandom: game of thrones
Subscribe